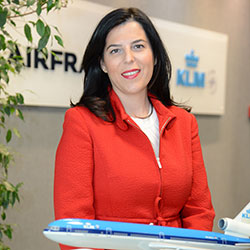 Asunción is Air France-KLM’s Sales Director since 2013; she previously held the position of Head of National Accounts since 2009. She began her professional career in 1992 at Viajes El Corte Inglés, in the group’s retail division and in the product department of Tourmundial. In 2000, she joined the sales team of Delta Air Lines, where she worked as an account executive in the Sales Department, Marketing and Communications Manager for EMEA area and later Sales and Commercial Director for Spain.