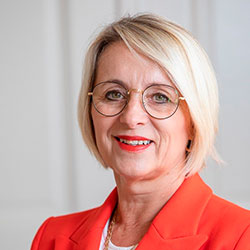 Mrs. Tepšić is the Deputy Mayor City of Dubrovnik as well as honorary consul to the Kingdom of Spain. She is a professor of the Spanish language, literature and Comparative literature and has more than 30 years of experience in tourism, communication, media and marketing. In the City of Dubrovnik, Mrs. Tepšić is responsible for tourism, sustainability and culture and while she has been the Deputy Mayor, the city has developed a strategic, long term project called “Respect the City”